The Luton’s Best Awards in partnership with Love Luton, celebrate the achievements of truly remarkable individuals and organisations who make Luton a better place. This year marked our 10th Anniversary and the awards evening was something rather spectacular including fireworks, a disco and one of our lucky nominees winning a holiday for two.

Since the first Luton’s Best Awards in 2009 many of the local businesses and leading local figures from show-business, sport, politics and the arts have all taken part. Hosted by Andrew Castle, the Awards attract an audience of 300.

Our winners come from hundreds of public nominations and stories of remarkable individuals and organisations. They are whittled down to a shortlist by the judging panel, made up of sponsors who all have a stake in the future and success of our town.

The winners were from all walks of life, of all ages, and from all over the town. Their achievements are awe-inspiring and a lesson to us all. They say they are ordinary people, but quite often their acts are truly extraordinary.

The Luton’s Best Awards and the Love Luton Partnership would not be possible without the fantastic support it receives from sponsors of which many have been involved since we began back in 2009.

The Love Luton partnership is proud to have organised these awards and would like to take this opportunity to congratulate all the winners and runners up and thank sponsors for enabling this event to happen.

During the night there were also two special recognition awards. The first was to Kelvin Hopkins who was recognised for his outstanding service to Luton over the last 22 years as MP for Luton North.

The second was to Sinead McNamara who has led and organised the awards for the last 10 years.

On the night the auction and raffle raised £5200 which was donated to our chosen charity partner Signposts. 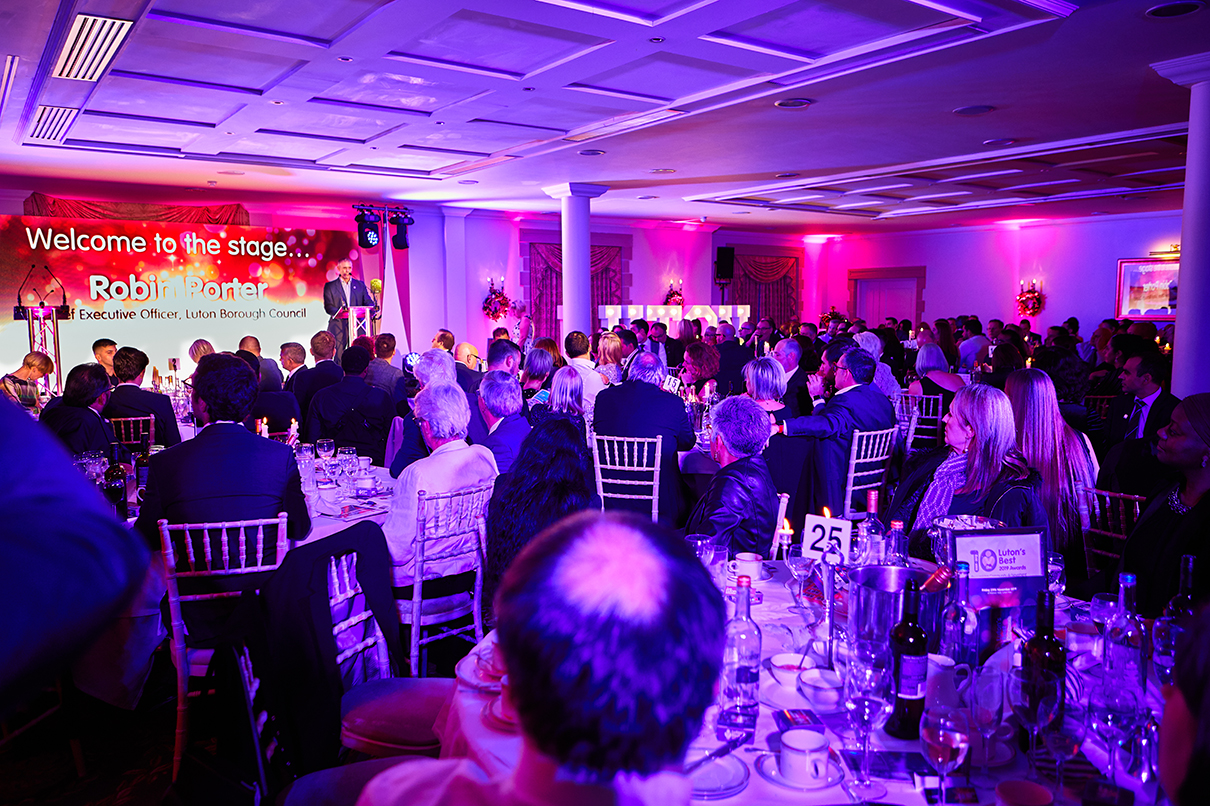 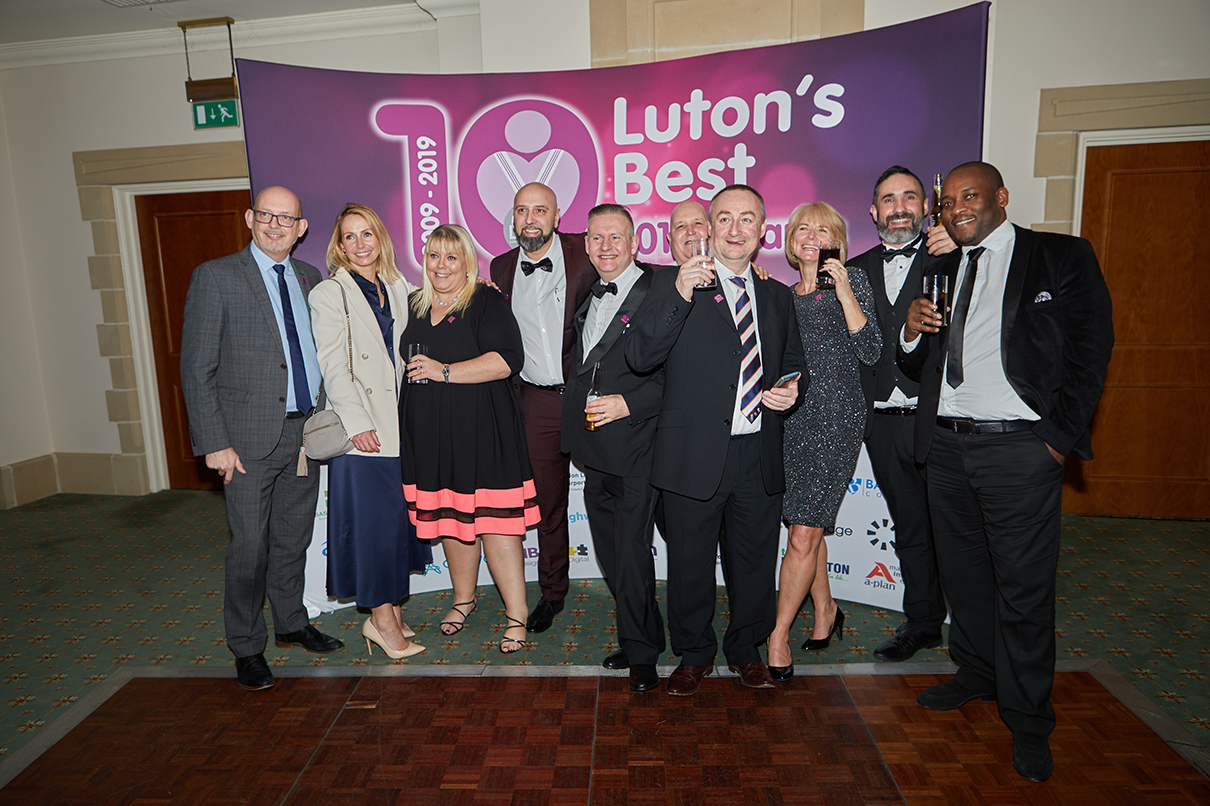 We are delighted to announce the Winners of the 2019 Luton’s Best Awards.  Congratulations to you all!

Sponsored by
University of Bedfordshire

Community Company of the Year Award

Sponsored by
The Mall Luton

Service with a Smile Award

Care in the Community Award

Community Businessperson of the Year Award

Luton’s Most Outstanding Citizen for 2019 Award

Community Project of the Year Award

Sponsored by
The Luton News

For this years Award Categories please see below. We’d like to give special thanks to all the sponsors who supported this year’s awards.

This award will seek to recognise an outstanding effort and levels of achievement by a young person aged 20 or under, either in their school lives, work lives, in a sporting context or within the wider community.

This award will seek to recognise an individual over the age of 21 who continues to achieve great things at work, in their profession, through arts and culture, in the field of education, sport, or a hobby or pastime.

Community Company of the Year Award

This award is looking for an individual or team employed either in the public, private or voluntary sector that goes above and beyond when it comes to customer service. Their effort and enthusiasm should have a positive effect on its customers and the business/organisation.

Service with a Smile Award

This award is looking for an individual or team employed either in the public, private or voluntary sector that goes above and beyond when it comes to customer service. Their effort and enthusiasm should have a positive effect on its customers and the business/organisation.

Judges will seek to recognise any young person up to the age of 18 who has put themselves in danger to help or save the life of another or has battled against the odds and has overcome adversity in their personal life or made a stand to improve the lot of themselves or others.

Care in the Community Award

This award is for an individual or group from either a professional or voluntary capacity. Those eligible include relatives (including children), friends, doctors, nurses or care workers who care for someone or a group of people. We are looking for an individual or group who have really gone that extra mile to care for our most vulnerable often showing incredible patience and understanding. Judges are looking for those who have cared for others sometimes over many years without giving thought to themselves.

An award to an individual or organisation demonstrating a commitment to enhancing and protecting our environment or a heritage site, introducing environmentally sustainable products or services and, in doing so, make a contribution to Luton’s environment or conservation areas. Examples could include an environmental community project; a school initiative involving children and parents or improving a conservation area to kick-start regeneration.

This award will recognise a volunteer(s) of any age who has made an outstanding contribution through giving up their own time to volunteer to help others, charities or initiatives across the town. We ask that entries are for individuals still active in their role but you can list all activities they have taken part in prior to 2016/2017.

Community Businessperson of the Year Award

An individual of any age working for an organisation or studying in the town who has shown a commitment and involvement with the local community and can demonstrate excellence in business which in turn enhances the image of the business community and Luton, locally or on a wider scale or someone who has provided superior service to business and the community as a whole.

The judges will be looking to award an individual or organisation which has excelled and inspired either as a professional or amateur in the areas of sport, arts, leisure, culture and heritage. The individual or organisation will need to demonstrate the support, commitment and success they have provided to the development and promotion of these areas within the boundaries of Luton.

We are looking for an individual over the age of 18 who is a true sporting inspiration who has either excelled at their sport and/or helped others and is a positive role model. The entry should include: A sports man or woman who has excelled in their chosen sport, rankings and achievements made during the eligibility period must be given, have demonstrated considerable commitment, are an inspiration and positive role model to others, have used their achievements and experiences to make a positive impact on their community and/or club and special qualities that set them apart from others.

The readers of the Luton News and Herald & Post will have the opportunity to pick the winner they feel is most deserving. On the week of 14th October the  newspaper will announce the shortlisted candidates. You will have until Thursday 21st November to pick your worthy winner.

Luton's Most Outstanding Citizen for 2019 Award

This award seeks to recognise an outstanding citizen of any age group or walk of life who has shown loyalty and support to the town, or promoted and enhanced our reputation locally and nationally. For example this person could be a member of the business community, sporting, or community sector, anyone who has benefited the people of Luton, this could be in a professional capacity, volunteering or local charity work. It could be a neighbour a relative or anyone who, in your view, typifies the very best of Luton. This will be a highly contested award that seeks to recognise Luton’s Most Outstanding Citizen in 2018.

The Teaching Award provides a unique opportunity for us to celebrate those who, tirelessly and often selflessly, dedicate their lives to securing a future for the next generation. The judges are looking for entries from students, parents and peers across Luton who feel their teacher deserves to be thanked and rewarded for their contributions. The person will still need to be teaching within the years 2016/2017.

Community Project of the Year Award

Judges will be looking to recognise a community based or environmental project which has been initiated by local authorities, charities, community groups, schools or others. The project must demonstrate a tangible community benefit, whether it be the establishment of a new service or a substantial improvement to previously available facilities and services. The project should have been completed within the last 18 to 24 months.

To recognise an individual whose achievements have been far-reaching in the community. Examples can include a volunteer who has given up their time for many years, a local carer or a business person who has given many years to improving the lives of people in Luton.

The judges will be looking for individual members of the public or groups who have put themselves at risk and acted with bravery and courage to help save the life or protect the well being of another. This could include tackling crime, disorder or anti social behaviour. Another example could include individuals or groups which have made a positive community contribution in terms of improving the environment they live or work which improves the safety of others.

This award will recognise a tireless charity fundraiser(s) of any age who has made an outstanding contribution either through their fundraising initiatives, voluntary work or other support. We ask that entries are for individuals still active in their role but you can list all activities they have taken part in prior to 2017/2018.

An individual or organisation who has proactively promoted community cohesion and celebrated diversity in the town through their initiatives which have helped to improve the public image of Luton.

With thanks to our partners who supported this year’s event by sponsoring other aspects of the evening:

We use cookies to ensure that we give you the best experience on our website. If you continue to use this site we will assume that you are happy with it.OkRead more